Cebu and the Visayas

White Sands, Blue Seas and a Festival of Colours

Cebu and the Visayas

Cebu and the Visayas are home to pristine white sand beaches, friendly locals, and some of the best diving in the Philippines. It is here where you get a chance to encounter rare marine life such as the elusive thresher shark, congregations of friendly whale sharks, massive balls of sardines, and tons of weird and wonderful macro critters.

Popularly known as the Queen City of the South, the sun-soaked island of Cebu boasts of miles and miles of sandy beaches, giving opportunity to a number of eco-centered tourism activities of which diving is the number one in most travelers’ list. Our Ultimate Cebu cruise takes our guests around the whole island of Cebu, offering the incomparable comfort and convenience of experiencing all the highlights and underwater glory the region has to offer.

Starting off in Mactan Island, the Big Sky Explorer cruises its way to the northern tip of Cebu where divers are treated with the rare chance to encounter the graceful and elusive thresher sharks of Monad Shoal, Malapascua. Here and only here in Malapascua, thresher sharks are seen on a regular basis and sightings are almost guaranteed every day. To get the best action, the dive is done at the break of dawn; with Monad Shoal being 45 minutes away from Malapascua Island, diving off a liveaboard gives our guests the great convenience and valuable advantage of being the first to reach the site.

An hour or so away from Malapascua is Gato Island, a remote marine sanctuary complete with an abundance of pelagic and macro subjects. White tip reef sharks patrol in and around the island’s underwater tunnels, while a plethora of macro subjects including pygmy seahorses and ornate ghost pipefish, show themselves to the patient photographer.

After spending two days exploring the northern tip of Cebu, we then proceed down to the western side of the island to experience Moalboal and its massive resident ball of sardines numbering by the millions, often being hunted by jacks, tunas, and even threshers. The jewel in the crown of Moalboal’s diving is Pescador Island, where drop offs, overhangs, and crevices along its magnificent wall will keep one busy looking for all sorts of things. Out in the blue, usual pelagic such as barracudas and tunas frequent the place. Bigger pelagic such as mantas, white tips, and hammerheads also turn up for an appearance from time to time.

Further down south the cruise moves on to the whale shark destination Oslob, where divers are given the unique opportunity to dive, swim, or snorkel with dozens of whale sharks all at once! What was once a sleepy fishing town, Oslob has recently transformed itself into an eco-tourist destination capitalizing on the regular whale sharks that abound in their bay.

The vessel then moves eastward to the nearby island of Bohol, exploring the underwater treasures of Balicasag Island, known for its amazing visibility and huge population of green sea turtles. The cruise may also take divers to Cabilao Island, famous for majestic walls covered in plentiful soft corals and gorgonian sea fans. Many have attested encountering shoals of hammerhead sharks off Cabilao’s walls during colder months.

Giving our guests the full Cebu experience, our itinerary also includes a full day opportunity to trek the lush tropical interior of Cebu which will reward guests with an exhilarating canyoneering activity along the enchanted Kanla-ob River, eventually finding its way to the pristine Kawasan Falls for an invigorating dip. After lunch, the activity is then followed by a relaxing afternoon session along one of Moalboal’s white sand beaches, before ending the day with a barbecue feast under the stars for dinner. 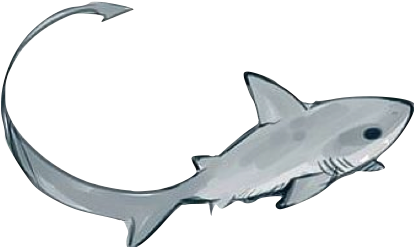 Thresher sharks are found all over the world, but Malapascua holds the distinction of being the best place in the world to dive with these majestic beings, with sightings guaranteed almost every day. Monad Shoal, a sunken island with a flattish surface approximately 27 meters below surface is the prime location for encountering these graceful creatures. While food is a prime motivation for thresher sharks to visit Monad Shoal, there is another reason why they can be seen in significant numbers in the sunken island; to get cleaned. The sharks have a symbiotic relationship with cleaning wrasses that consume dead skin in various parts of the shark’s body and prevent infection from developing. For this reason, the sharks do not consider the wrasse as prey.

It is also important to note that while thresher sharks are sadly still being hunted worldwide for their fins, strict laws and legislations have been passed in 2017 to protect the thresher shark population in the Philippines.

The incomparable comfort and convenience of a liveaboard gives you the opportunity to experience variety and dive the most interesting sites, especially the remote ones, all within your dedicated period of time.

For those who wish to have an extended vacation with us, we also offer liveaboard cruises beyond Cebu for up to 8 or 12 days. Included in the extension are pristine Apo Island and Dauin in the Negros, the volcanic island paradise of Camiguin, remote Anda in Eastern Bohol, and the lush and rugged Southern Leyte.

Located a few nautical miles away from the southern coastline the Negros island is one of the Philippines most successful marine conservation projects, Apo Island. Regarded by many as the most pristine dive site in the world, its exhilarating drift dives will bring divers over sloping reefs where schools of barracudas, jacks, parrotfish, and trevallies are seen by the huge numbers. Coral formations are amazingly intact, giving the place a very prehistoric feel. Dauin on the other hand is a muck diver’s paradise, where one can spend hours in one site exploring and interacting with weird and wonderful sea creatures that may have yet to be identified. For those whose ambition is to discover and name a sea creature after oneself, this place is your best chance to do so.

Excellent diving awaits you in this remote volcanic island known as Camiguin. Rarely included in any Visayan liveaboard cruise, the distant island is already at the northernmost part of Mindanao. Its natural beauty both above and underwater merits a visit from any ardent traveler. Being a volcanic island, Camiguin is blessed with rich fertile soil, giving way to lush rainforests, misty jungles, and invigorating waterfalls, making it truly a tropical paradise worth visiting.

At the eastern part of Bohol is the remote and peaceful coastal town of Anda, where undisturbed waters make it an excellent place for underwater photography. Pygmy Seahorses sitting on giant Gorgonian Sea Fans are not uncommon, while other rare creatures including the wonderpuss, flamboyant cuttlefish, and a plethora of nudibranchs, shrimps and crabs grace Anda’s sandy patches. 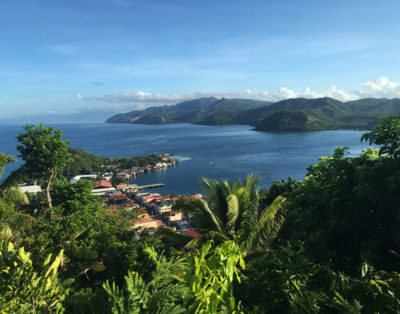 Only in recent years has Leyte started to flourish as a dive destination, with colorful walls, excellent macro life, and regular pelagic visitors such as whale sharks gracing the area, being some of its top draw. Aside from it being abound by underwater treasure, Southern Leyte is also gifted with tropical waterfalls, rugged mountains, and an abundance of virgin rainforests.

*Actual route is subject to change under Cruise Director’s discretion and/or in the event of change in weather or other unforeseen circumstances. 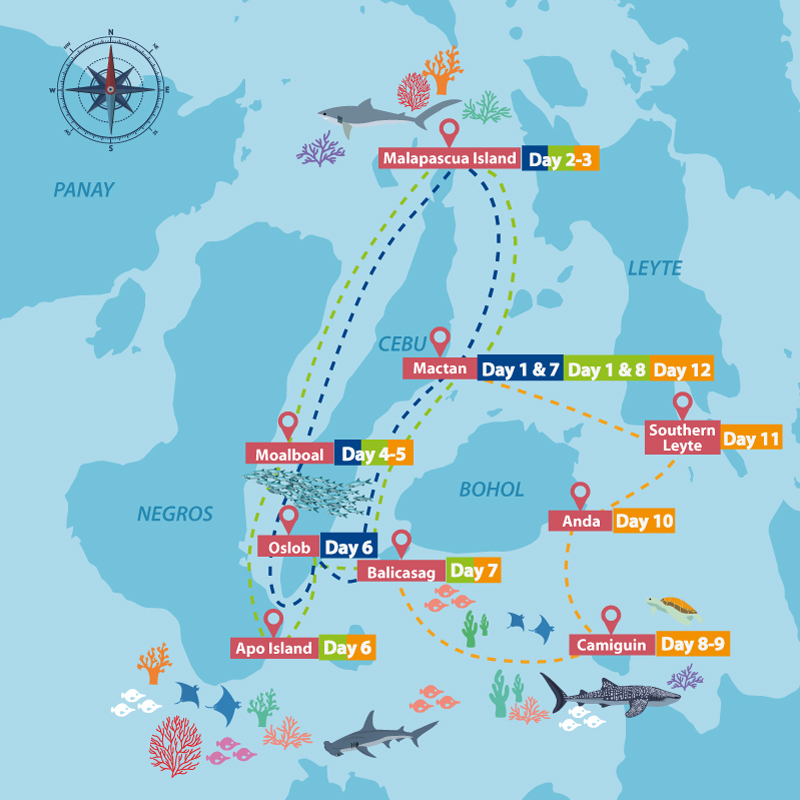